MANRESA is a Catalan city, capital of the region of Bages, in the province of Barcelona, ​​of the Catalonia autonomous community. It is 65 km from the city of Barcelona, ​​known as ‘the heart of Catalonia’ because of its central location, marking the boundary between an industrial environment to the south and a rural one to the north.

The municipality of MANRESA extends over 41.66 km2 and is located near the confluence of river corridors Cardener and Llobregat. Located at 238 meters above sea level, has a topography marked by the presence of five hills.

Mediterranean climate characterized by lowland notable temperature variation, marked by a humid climate with hot summers and cold winters. The average temperature over the last forty years has been 14.2 degrees celsius.

The name of MANRESA appears first documented in 889. From the middle of the X century, there are some references to Manresa County, a county without counts that had a military purpose and low population problems: the central lands had become depopulated because of clashes with Muslims in Lleida.

Centuries later following the general trend of Catalonia, MANRESA entered a period of decline relative to other peninsular lands. Civil wars, epidemics, dynastic problems were some of the drastic changes happening. One good thing that happened and has a strong significance was the visit and stay of Saint Ignatius of Loyola 1522-23.

This is place where Saint Ignatius of Loyola retired for a time to meditate and develop the Spiritual Exercises. Over the years, a simple little cave has become the city’s greatest monument. A large sanctuary has been built literally above the cave, which has become indisputably the key Ignatian site and one of the universal landmarks of the catholic world.

BASILICA OF SAINT MARY OF MANRESA

‘La Seu’ is the principal monument of Manresa. The Gothic church was designed by Berenguer de Montagut, who also designed works as important as Santa Maria del Mar in Barcelona. The privileges conceded by Pope Leo XIII in 1886 turned the temple into a Basilica. 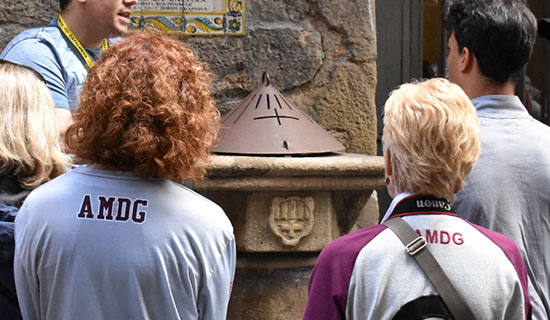 WELL OF THE HEN

On the Sobrerroca Street  there is a well. According to the legend, Agnes, a girl from Manresa, was taking care of her stepmother’s hen when the animal fell into the well. Agnes asked Saint Ignatius to help her. In the 18th century a chapel was built next to the well to remember this episode associated with the saint.

CHAPEL OF THE RAPTURE

Located in what was the former Hospital of Santa Llúcia, destroyed during the Civil War, this chapel recalls one of the miracles carried out by St. Ignatius of Loyola: a spiritual rapture which left him motionless for eight days and eight nights. 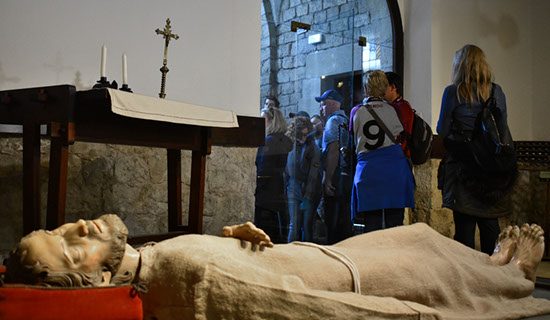